When I left Jordan on July 22nd, 132 miles of ranches, farms, and the Judith Mountains separated me from Lewistown. My stopping points on the five day walk were pretty straight forward – Sand Springs Campground, the Hill Family Oasis Bed and Breakfast, Winnett City Park, and Little Montana Truck Stop. It was nice having a lineup of civilized sleeping spots planned. I could carry less water during my daily walks and wouldn’t be camping in the rattlesnake infested long grass off the road.

The Sunday walk to Sand Springs was beautiful and quiet. Sundays are typically my favorite day to walk (low traffic levels). I enjoyed a nice shoulder and never grew tired of endless ranchland. I started playing a new game – spot the cows – to keep myself entertained. I would peer far off into the distant hills and look for herds of black cows grazing in the fields. I arrived in Sand Springs early in the evening after a 32 mile walk and was able to enjoy an unobstructed view of the setting sun. 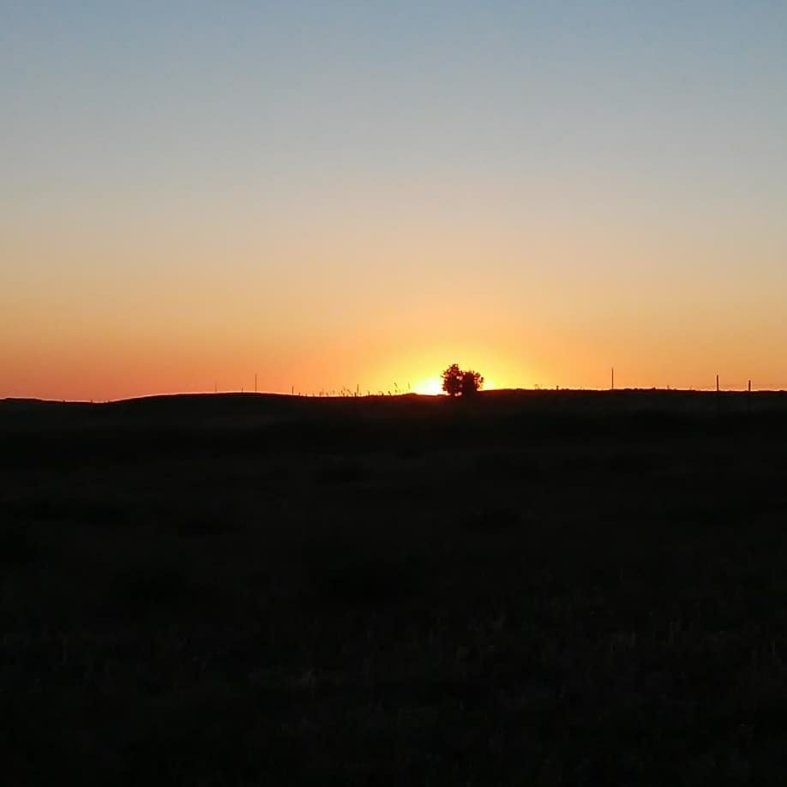 There are very few trees on the windswept Montana prairie, but there happened to be one right in line with the setting sun in Sand Springs!

My friend Gary Anderson, who I met on my first walk in Oberlin, Kansas, set me up with a spot to stay at the “Hill Family Oasis,” which is a B&B on the Hill’s ranch near Mosby, the night after I left Sand Springs. It was a short 18 mile walk to the turn-off. A few miles before my destination, I walked up a hill and caught my first view of Montana forests. The ponderosa pine weren’t thick, but I was elated. 30 days ago I was excited to leave the forest. Now I was pumped to be back in one! 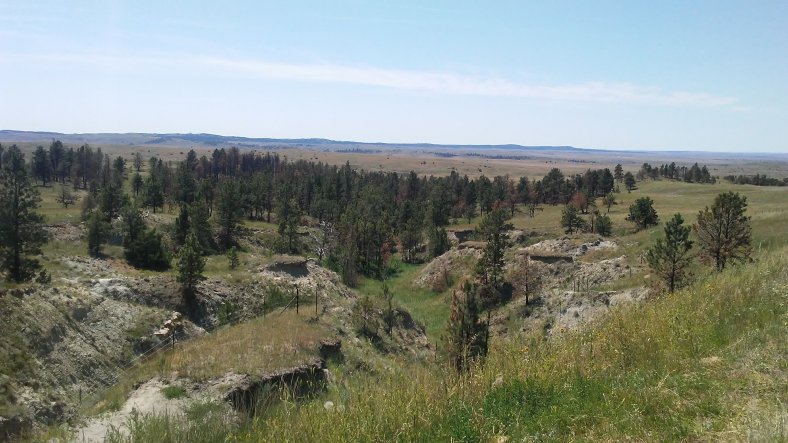 Kevin, his wife Gayla, and mother Dolores, treated me incredibly well during my stay. Their shower pressure was top notch (I hadn’t bathed in a week), the spaghetti dinner we shared was delicious, and Kevin took me on a tour of the ranch for dessert. Since Dolores’s husband passed away in 2016 (they had been married for 60 years) the family has sold off most of their cattle and leased a good chunk of their land. They still have 150 sheep and a few cows on the remaining 10,000 acres. The sun was setting as we rumbled down dirt roads in Kevin’s pickup truck. Buddy, one of the ranch’s working dogs, sat in the front seat between Kevin and I.

The Hill family and their hounds. From the left, Dolores with Copper, Gayla, Kevin holding Buddy, and Ace stretching out. I got my people and dog fix during the visit! Thank you for the great visit, Hill family!

It was a quiet two days of walking from Mosby to the Little Montana Truck Stop. Highway 200 had a few narrow stretches, but didn’t have the roller coaster hills I encountered between Circle and Jordan. 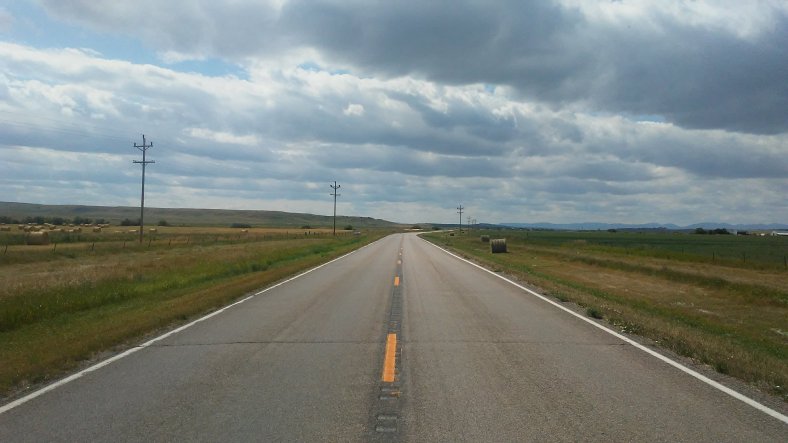 Low traffic levels allowed me to walk to the middle of the road and take a picture of a narrow, but flat stretch of highway near Little Montana Truck Stop.

I began the 31 mile walk to Lewistown around 7 AM on July 26th. I desperately needed a new pair of shoes and wanted to get to Shopko before they closed that night. At 11, I had to take a weather delay as a storm came barrelling over the Judith Mountains. I left PJ 10 yards off the highway and sat in my camp chair in a grassy ravine and waited for the thunder, lightning, and rain to stop. 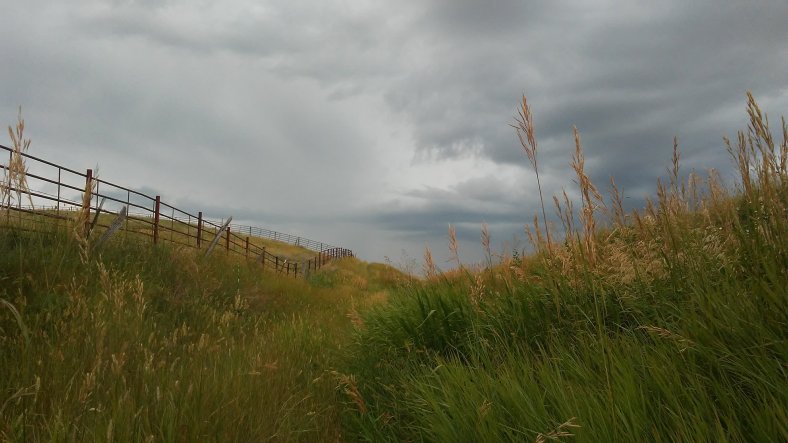 After the storm passed, I walked up and over the Judith Mountains. I had a feeling the climb and descent were tame compared to what I will face in the Rockies, but it was a nice warm up. Once I started the five mile downhill walk into Lewistown, I could see several more mountain ranges in the distance. More dark clouds over those mountains discouraged any dawdling. I beat feet into town and arrived at Shopko, dry, with time to spare.

I decided to take a rest day in Lewistown to relax and recuperate before my push to Great Falls and the Continental Divide. It was a great decision. Lewistown sits in the Judith Valley and is surrounded by five mountain ranges. Well-maintained historic buildings line the downtown strip alongside large neon signs that mark where the restaurants and casinos are. It was also a very walkable town, complete with smooth sidewalks, plenty of crosswalks, and ramps on street corners (as opposed to curbs). PJ was thrilled. 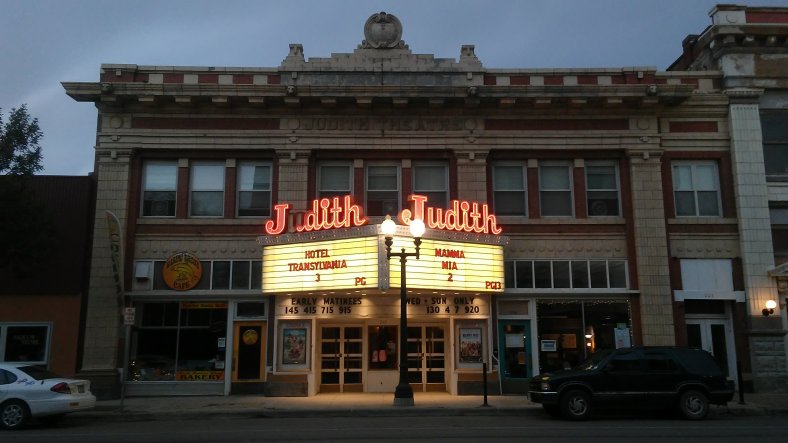 The Judith Theater in downtown Lewistown.

I left Lewistown well rested and set my sights on Great Falls, 103 miles away.

On my first day out of Lewistown, I approached the tiny town of Windham, 34 miles into my day, when thunder and lighning began in the Little Belt Mountains just west of town.

PJ and I went into jogging mode and hustled towards an open sign that was visible from the top of a hill. The sign belonged to “Bar 87,” one of the few businesses in town. It was the first bar I have gone into on my walk. I quit drinking in April of 2017, so bars are no longer my scene. But in this case, it was the best shelter available! I sat down and ordered a Coke when a woman named Lennis sat down next to me. She ordered dinner to go, and we got to talking. When I told her about my “Walk for 60” mission, she gave me a big hug, saying “We met for a reason!”

Lennis is 74 years young, and a widower. Her husband of 27 years passed away in March, 2017. She decided to sell her home in Windham and start fresh in Great Falls. One thing she is especially excited about is getting more active. The uneven gravel roads in town aren’t safe for her to walk, and Montana winters are brutal. She will have access to sidewalks and an indoor exercise facility at her new home. Lennis quickly invited me to stay in the loft at her house.

We crammed some great conversations into my 12 hour stay. She had an emotional few days preparing for her move, and was admittedly lonely. I hope that my stay helped her feel a bit less lonely. I know it had that effect on me! I am excited to see how her fresh start and new exercise regimen go. 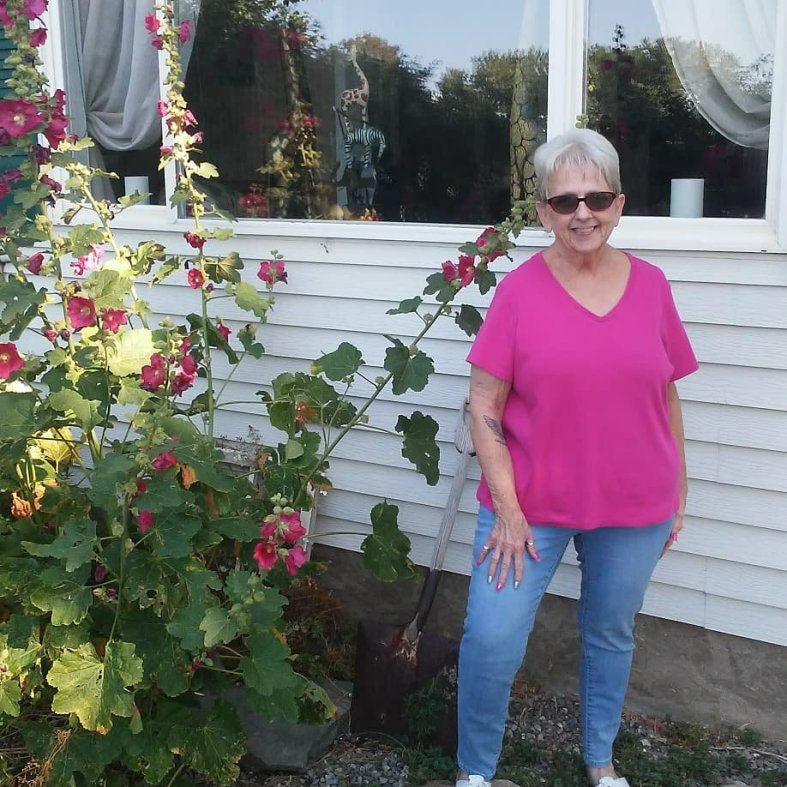 Lennis outside of her home in Windham. Thank you for your company, hospitality, and friendship!

I was reenergized by the fortuitous new friendship I found in Windham. I walked hard the next two days and arrived in Great Falls on July 30th near dusk. I had no idea where I was going to stay, so I called the KOA in town and decided 46 dollars was too expensive for a tent site. “I would rather sleep in a field than pay that,” I stubbornly told myself. As it turned out, I camped in an unused field that neigbored the KOA.

I began my trek toward Roger’s Pass and the Continental Divide the following morning. My Dad was on his way up from Colorado to pull me off the road for a few days, and my goal was to arrive in Lincoln by the time he made it into Western Montana. Lincoln is 88 miles west of Great Falls.

It was a hot few days of walking after leaving Great Falls. The mercury soared to 96 degrees (the hottest temp on my trip to the point) on my walk from Vaughn to mile marker 117. Smoke from Western wildfires made the air hazy and temperatures seem even hotter. I camped off the highway in a low spot, hidden from passing cars. Without trees stealth camping is a challenge!

I arrived at the base of the Rocky Mountains on August 2nd. Highway 87 was a beast even before I got to the mountains. The road would climb a massive hill, drop into a valley, then climb a hill out of the valley on the other side. 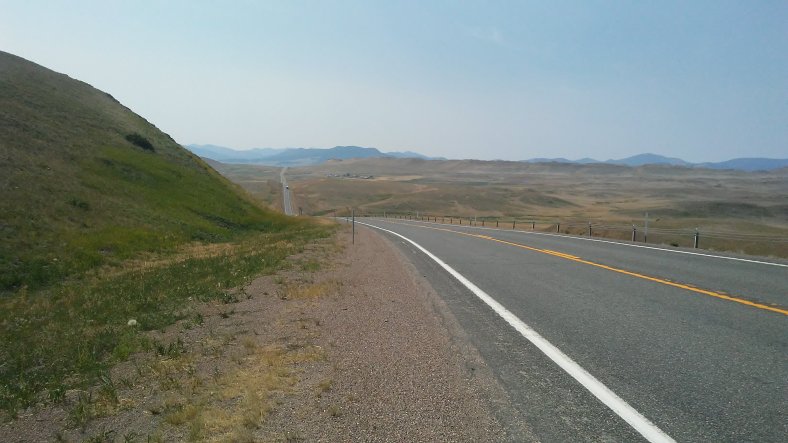 This photo, taken about 12 miles from where I started my climb up Roger’s Pass, doesn’t do the substantial elevation changes any justice!

I was beat by the time I began the four mile, 1,500 foot climb up Roger’s Pass. It took two hours, but I arrived at the summit, nearly collapsing. 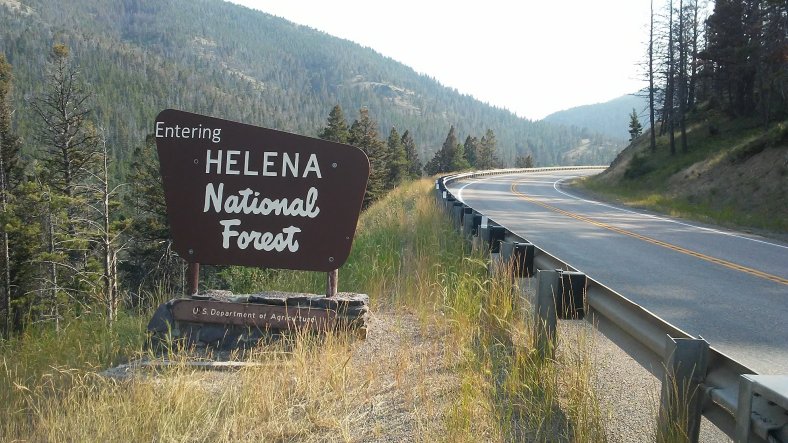 Roger’s Pass was a long, steady, draining climb, ending at 5,600 feet. Fortunately there was an ample shoulder and plenty of places to stop and catch my breath (and take a few pictures)!

From the summit of Roger’s Pass and the Continental Divide, Lincoln was an 18 mile downhill walk. I camped just past the summit in Helena National Forest before walking into Lincoln the following morning. Three days prior, I told my dad I would be there at noon. I arrived at 11:20! Ahead of schedule!

Favorite Roadside Find – A toy giraffe I named Jerome. I duct taped him to PJ’s flag pole. I have had a few “mascots” on my walk – Tipsy the horse, a Spongebob figurine, and now Jerome! 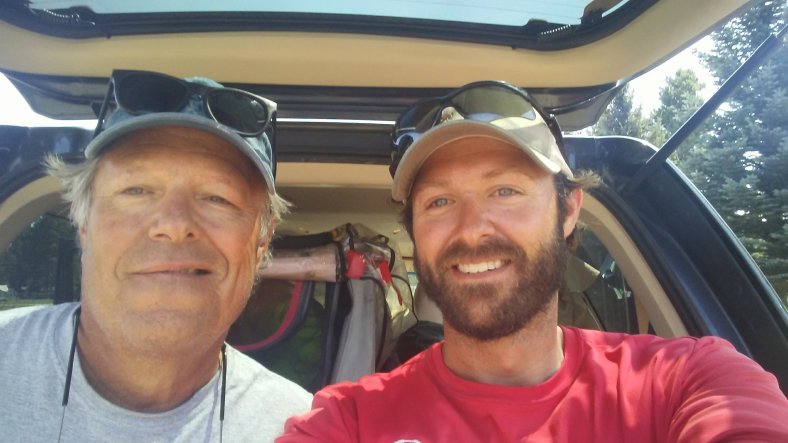 My dad’s arrival was certainly emotional! For the first time in 114 days, I saw a familiar face. It is a true blessing to be able to spend some quality time off the road, exploring the beauty of Northern Montana with Dad! 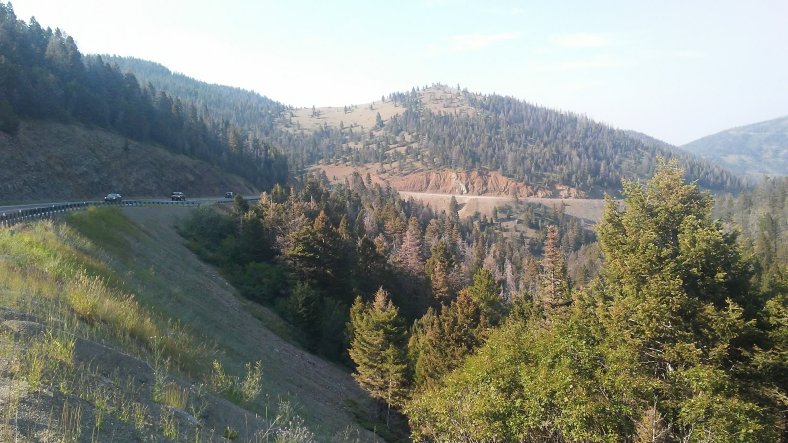 Roger’s Pass was exhausting. The hills that led up to the climb were what did me in. But the climb was another reminder to keep putting one foot in front of the other….No matter what. Eventually the mountain will end, and if you stop, you can’t get to the top! 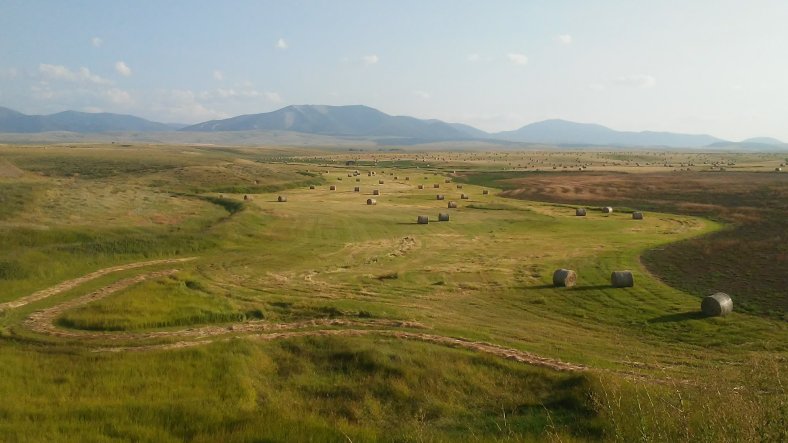 Thanks to a wet spring and early summer, it has been a hayll of a year for hay farmers. 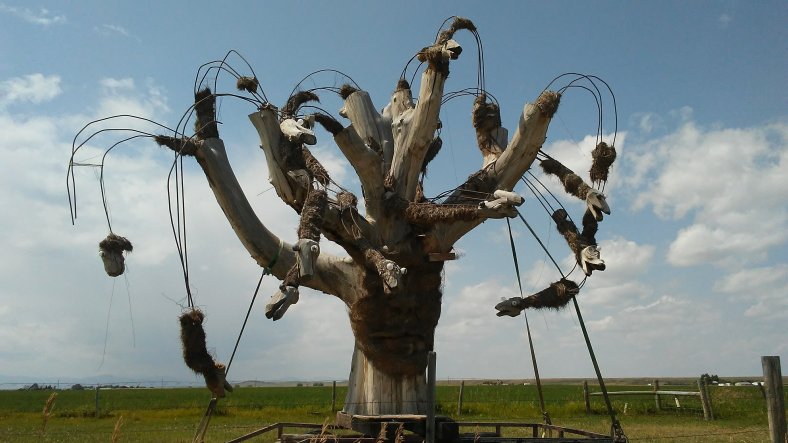 I passed this art installation about 20 miles west of Lewistown. I have no idea what it is, but it certainly provided something different to look at.

I am incredibly excited to spend the next four or five days with my dad…We plan to explore Flathead Lake, Glacier National Park, and several Lewis and Clark Historical Sites. I am going to cherish every minute….And I will certainly be ready to tackle the remaining 800ish miles separating Lincoln and the Pacific Ocean!

One thought on “Rocky Mountain Hi”